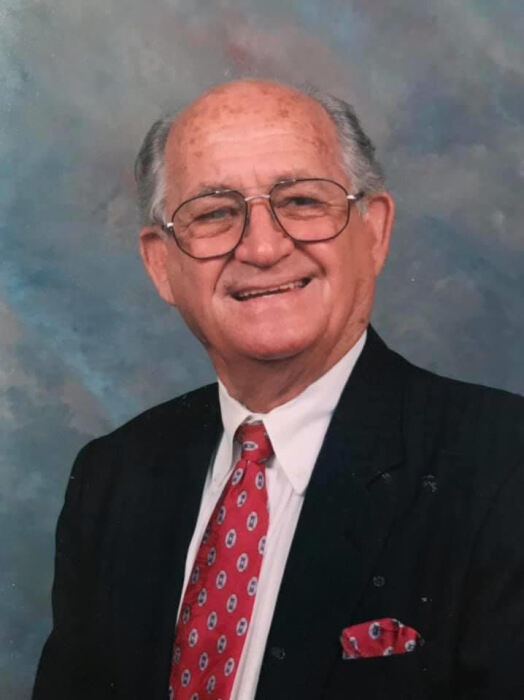 James Earnest Bowers II was Born in Lenoir City Tenn. on July 17, 1925.  He left this world on January 28, 2021 at the age of 95 surrounded by his loved ones in  Ridgecrest California. He was sworn into the United States Navy July 21, 1942 at the age of 17. He served in WWII and the Korean war.  James E Bowers married the love of his life Jessica on August 1, 1943 in Reno Nevada. Together James and Jessica built a life with 4 children, they were married for 63 years. After his service in the Navy he became an ordained Bishop with the Church of God, where he ministered for over 68 years. He was a member of the 6th avenue Church of God since 1932.  His love for God, and passion to spread the word led 4 generations to follow his footsteps in the ministry.  After retiring from the ministry, he volunteered at the Salvation Army for many years. He rarely missed little leaguegames, high school football games or rodeos that any of his great or great great grandkids were competing in. He Found joy in his family, he never missed a birthday dinner, wedding, or social event. He enjoyed traveling and spending time with the family.  He loved being the center of attention, always had a good story a sermon to give, or joke to tell. He prided himself on being a Godly man, a family man, a Veteran, and his legacy shows through the love and dedication he poured on the world for 95 years. He is preceded in death by his mother, Lillie Smith Bowers, father, James E Bowers Sr, Loving devoted Wife Jessica May Bowers, Brothers; Robert, Clarence, Sisters; Ruby, and Edith.  daughter Sharon Kay Bowers, Grandson Jimmy Bowers, granddaughter Kathy Griffin, and great Grandson Jonah Douglas Bowers. He leaves behind his sister Margaret Zimmer, daughter Donna Griffin, her husband Charles, son James E Bowers III, and wife Elke, son Doug Bowers, and wife Pam. He leaves behind 8 Grandchildren Charles Griffin Jr, wife Ronda, Kim Narramore, husband Ben, Jason Griffin, wife Heather, Melissa Griffin, Doug Bowers, wife Lynda, Deanne Travis, husband Keith, TrishelleBowers, and Sharon White, husband Rubby, 36 great grandchildren, and 20 great great grandchildren.  He was blessed beyond measure, and loved more than he ever knew, the footprints he left for his family are etched in the sand and will not be easily washed away. His legacy will live on through all the memories made, the stories told, the life lessons taught, and the values he instilled in his family. In James E Bowers fashion, we leave you with this scripture:   John III 2- Beloved, I pray that you may prosper in all things and be in health, just as your soul prospers.

Forever loved by his family.

The family will receive friends Wednesday, February 10, 2021from 5-7pm at Loudon Funeral Home. A funeral service will be held Thursday, February 11, 2021 at 12pm at Maranatha Church of the Harvest, for the Bowers family, with Dr. Tommy Patterson and Bishop Douglas Bowers officiating. A graveside service will follow in the Lenoir City Cemetery. The family requests that masks be worn by everyone who attends the visitation and funeral service. Online condolences may be extended to the family at www.loudonfuneralhome.net.  Loudon Funeral Home and Cremations in charge of the arrangements.

To order memorial trees or send flowers to the family in memory of James Bowers, Jr., please visit our flower store.

Maranatha Church of the Harvest